The Puerto Rico South Chamber of Commerce (CCSPR); main voice and representative action of the Business Community of the Southern Region of Puerto Rico.
The origin of the Chamber is related to the quest to improve the economic conditions of nineteenth-century Puerto Rico. There is no document certifying the exact date on which the organization we know today as the CCSPR emerged. However, there was a Royal Decree, dated December 19, 1885. The oldest official document that exists of the Southern Chamber is a minutes of session, dating from May 1887, signed by its president, Ermelindo Salazar. The Southern Organization was formally known as the “Chamber of Commerce and Navigation” (CCN). The initial purpose of this young organization included working for the commercial and social development of the southern area, serving the areas of commerce, industry, navigation and agriculture. During the Spanish Regime, the CCN provided support to the Hospital Santo Asilo de Damas (now Hospital Damas) in its beginnings and helped the victims of the fire of 1895, which occurred in Barranquitas. The organization worked for the establishment of the ring train, and formed a corporation that raised funds to take the “iron road, as it was known, to Adjuntas, Utuado and Jayuya, to facilitate the marketing of agricultural products.

CNN became involved in the construction of the Ponce Pier in 1913, and pushed for the dredging of the port, to make it the deepest on the island. A fire destroyed the headquarters of the Institution, then known as the Chamber of Commerce of Ponce and South of PR, losing the records that correspond to the years 1897 to 1929, so there is no documentary evidence of work done by the organization in those years. The first official documents of the twentieth century of the Southern Chamber date from 1929, when the organization was incorporated as an institution and the First Regulation was established. Acts that correspond to the years 1949 to 1957, mention various efforts of the Chamber in favor of the establishment of an airport and a university in the region of Ponce.

In 2005, the Centennial Institution changed its name to the Puerto Rico South Chamber of Commerce in order to reflect that it is the Chamber of Commerce that serves merchants in the Southern Area of Puerto Rico. Among the Chamber’s continuous efforts towards the economic development of the Southern Region, support for the Port of the Americas stands out. The Puerto Rico South Chamber of Commerce has maintained an impartial and apolitical position on local affairs, maintaining good communication with the media. It holds annual seminars, forums, workshops, business lunches and trade fairs, better known as Expo Chambers, exhibitions of goods and services of wide participation in the South of Puerto Rico. The Chamber has an enrollment that fluctuates in the 500 members, these represent the sectors of Commerce, Service Companies, Industry, Banking and Agriculture. It has instituted the CEIBA and Values of the Year awards to honor citizens who in one way or another contribute to the economic and social development of the island. 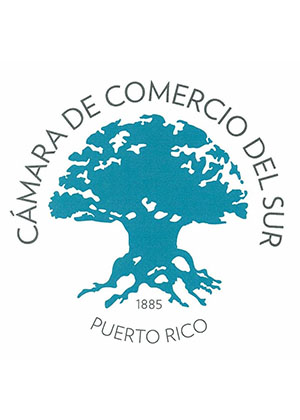